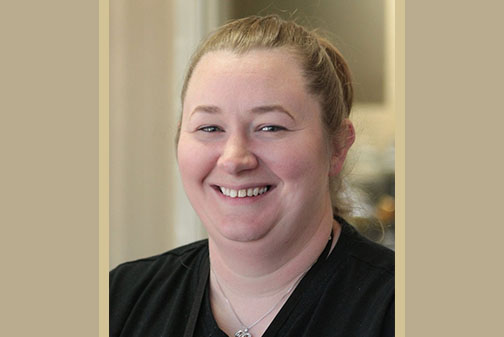 Rebekah Vaughn has come a long way from the days she lived in a shed in Abilene. Lost, confused Rebekah spent six months caring about nothing: Especially and including herself. Before she found FaithWorks, her life was the sum total of co-dependency and a host of other addictions.

“I ended up losing everything. More than once,” she said. She was exposed to FaithWorks before she actually enrolled, having tried to come a few year’s previous, during her second stay at the Noah Project. But it wasn’t until she lost everything in 2017 and landed at Hope Haven that she ended up enrolling and graduating from FaithWorks.

“I wanted to come the first time I was there, but I went back to my husband, and we had a house and bills to pay,” she said. “I thought it was normal, so it took me a long time to do anything about it. I didn’t have a family, I didn’t have parents. I felt like an orphan; I didn’t belong anywhere. I didn’t think anybody cared about me.”

For Rebekah, the Book of Matthew and longtime volunteer Dave Dalzell’s class on it changed that for her.

“In the second class, I just had this moment of freedom,” she said. “It was instant, and my life hasn’t been the same since. And that was just the beginning because I have a family here, and I do have a Father now. I was just reborn.”

Rebekah’s parents were both drug addicts, and she was once, too, addicted to drugs. Her parents separated when she was young, then her mother remarried a few times. Rebekah dropped out of school, went on a drug binge, but she earned her GED.

“My home life was horrible,” she said. She knew that the family drug life was not normal, “but I didn’t do anything about it because the unknown is scarier than something you’re familiar with.” She went through treatment twice: The last time in 2015. She drifted; sober, for a couple more years until she enrolled in FaithWorks.

“Everything just clicked,” she said. “My whole existence was explained to me all at once, and the past made sense – and none of it mattered anymore. I was putting all these expectations on my parents and myself.

“They were unrealistic – because we’re not God. They’re not God; I’m not God,” Rebekah said. “They’re humans. So bad things happen to people, and people make bad choices because they’re not perfect. All my expectations were causing all this pain and hopelessness. It was like a big chain reaction. Once everything got set in order, all of that just fell off.

She said everything has gradually gotten better since her time at FaithWorks. Rebekah did her internship at Serenity House, and she’s traveled through a series of jobs leading to the one she holds now: as a community health worker for the Area Health and Education Center.

More than her circumstances have changed, however, her attitude shifted, too.

“I was a new person. Everything looks different, everything feels different. It’s beautiful outside, and it wasn’t before,” Rebekah said.

FaithWorks showed her that her actions have consequences, and therefore, change the trajectory of her life. “I was actually responsible for more things than I thought,” she said. “You don’t see it when you’re in the middle of it. You don’t have any clue that you made those choices. So I was able to hold myself accountable.”

The classes held at FaithWorks gave her “hope again about being able to learn.” “When I was using drugs, my mission was to harm myself at the beginning. It was like self-mutilation.” She had always made A’s in elementary and middle school, all without studying, but she believed the drug use forever changed that. FaithWorks re-ignited her faith that she can still learn and grow.

Rebekah is now living in a house owned by Highland Church of Christ. “My kids sleep in my bedroom right now because we’ve lived in shelters for so long that they don’t know how to not sleep in a room with me. We don’t use much of the house, but when we figure it out, it will be there.”

She has 4 children, two of whom she regained custody of after FaithWorks. The elder she has also reestablished a relationship with.

“It’s like everything started over,” she said. It has taken time, but she has forgiven herself. “I didn’t have to own the things that happened before or what I had done to myself. Now everything is new. It just changed my heart. They did something to my heart. It feels like a heart transplant or something – because it’s not the one I had before.”